Lipoma of the coecum with secondary changes of the surface

Our endoscopically and histopathologically well documented case report is about a lipoma of the colon, which is a relatively rare benign mesenchymal tumor found in the large intestine. The lipoma was cha­racterized as a pedunculated polyp in the cecum, intermittently translocating into terminal ileum and obstructing Bauhin's valve, resulting in clinical symptoms. During patient examination, lipomas present with differential diagnosis challenges due to their close resemble to other disorders, which might occur much more commonly are more probable to be malignant. Furthermore, bigger lipomas can also harbour secondary changes, such as erosion, ulceration, bleeding and necrosis. Although endoscopic and ima­ging techniques offer assistance in characterizing lipomas, the final diagnosis still relies heavily on the resecting and histologic examination of the entire polypoid/tumor-like outgrowth of the mucosa. Superficial sampling might also lead to misdiagnosis. Our case had inflammatory, erosive and also hyperplastic surface which could have been concluded as a hyperplastic polyp of colon, a much more common occurrence.

Our case report describes a lipoma, a benign mesenchymal tumor of the colon, which occurs quite rarely, but can mimic more frequently found and possibly malignant polyps. Therefore, differential diagnosis is a crucial importance. The bigger the lipoma is, the higher chance it will harbour secondary changes (inflammation, ulceration, necrosis, hyperplasia), leading to further differential diagnostic complications, especially with superficial sampling. Our pedunculated lipoma had demonstrated hyperplastic/inflammatory changes due to its mobility on the long stalk, emphasizing the importance of a complete resection and histological examination of the entire lesion in order to arrive at the final diagnosis.

A diverse variety of benign and malignant lesions can be found in the colorectum. The vast majority of these are of epithelial origin, such as tubulo/villous or serrated adenomas, hyperplastic polyps, juvenile polyps, hamartomas and neuroendocrine tumors. Mesenchymal tumors in the colon and rectum are quite rarely found. These include GIST, leiomyomas, lipomas, schwannomas, perineurinomas, ganglioneuromas, granular cell tumor, and different kinds of vascular tumors (1).

The histological diagnosis of lipomas is usually straightforward capturing the mature fat cells that proliferate in a benign manner, sometimes accompanied by thick-walled and dilated vessels. The first colonic lipoma diagnosis dated back to 1757 by Bauer. Among benign

Figure 1: Endoscopic appearance of the long pedunculated polyp which retrack into the terminal ileum through the Bauhin’s valve 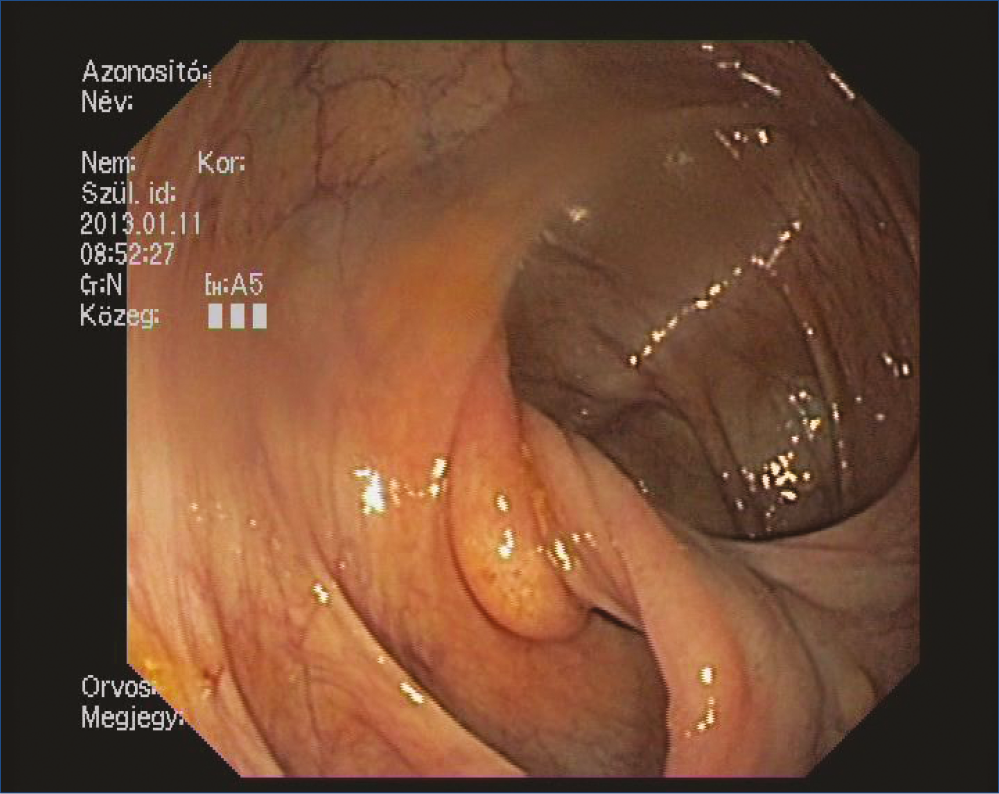 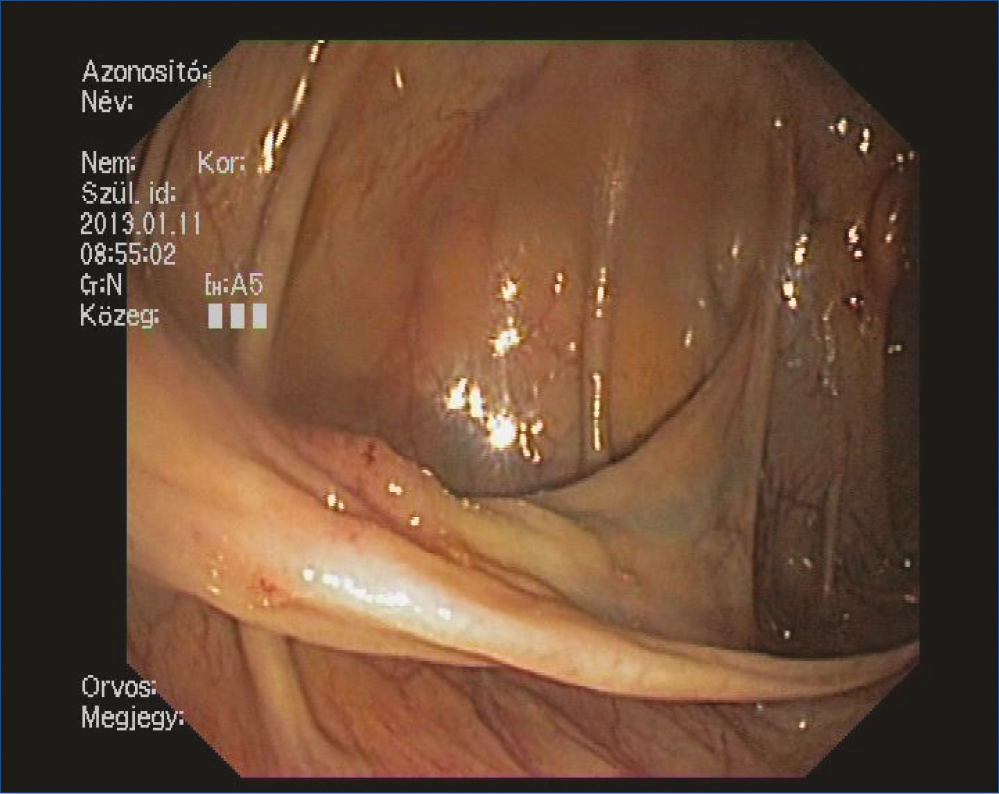 epithelial tumors, lipomas are the most common ones (2) with an incidence among the polypoid lesions of the colon ranging from 0.035% to 4.4% (3, 4). Lipomas can be found usually after the 5th decade and can locate anywhere along the GI tract; but, up to 50-90% of cases are located in the right side of the colon (4, 5) and 10% can be multiple (6). Some studies found a slight female predominance (7, 8).

Lipomas usually form a polypoid mass in the GI-tract and potentially mimic the more commonly found epithe­lial counterparts that might reveal a malignant potential la­tter.

Therefore, lipomas might cause severe differential diagnostic problems. Basically, the usual roundish shape of the lipomas suggests a benign behaviour; never­theless, bigger lipomas often harbour profound secondary changes in the body and overlying mucosa such as inflammation, ulceration and necrosis. As polypoid tumors of the GI-tract are usually an indication of an endoscopic biopsy, a superficial sampling of the mucosa covering the lipoma might

Figure 3: The stalk of the lipoma contains wide and crass vessel 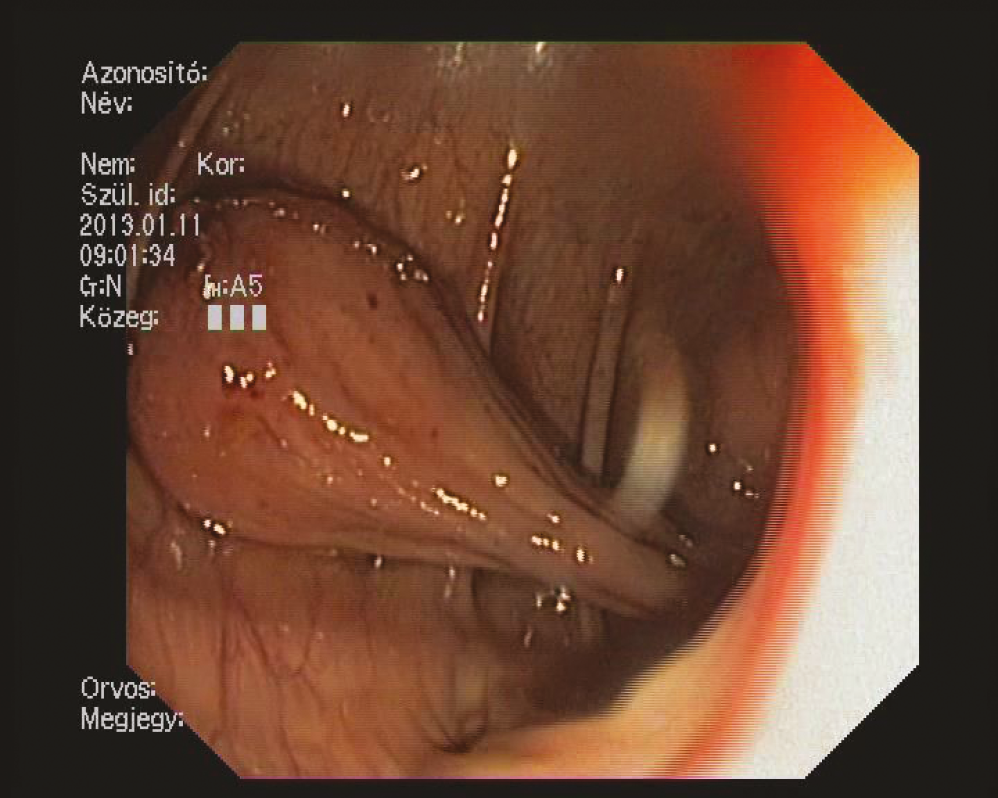 Screening colonoscopy was performed on a 69 year-old woman. The endoscopy examination revealed a long pedunculated polyp which grew back to the terminal ileum through the Bauhin fold, dividing it into two parts (Figure 1). The long polyp could be pulled back to the colon with a biopsy forceps. An 80 mm long and ten­der formation became visible which possessed a wide and crass vessel containing, stalk (Figure 2, 3). Due to the tenderness, our initial diagnosis was essentially a lipoma. We performed the polypectomy 4 days later: in order to prepare for an incidental complication, on-site surgical intervention was facilitated. After endo-loop placement onto the stalk, the polyp was removed entirely without complication.

Figure 4: Lipoma’s HE stain at low magnification. Under the mucosa the area is filled with “empty-looking” cells, adipocytes with some septa and thick-walled vessels 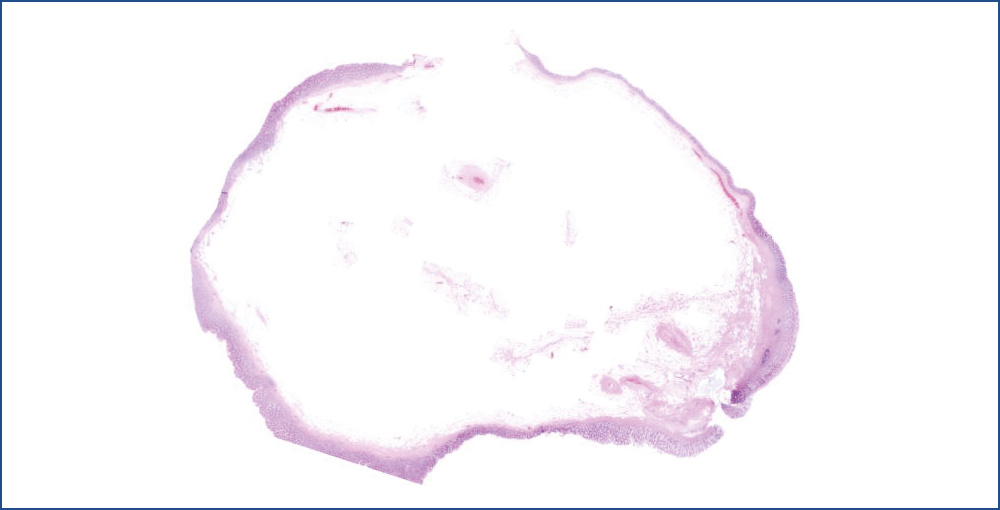 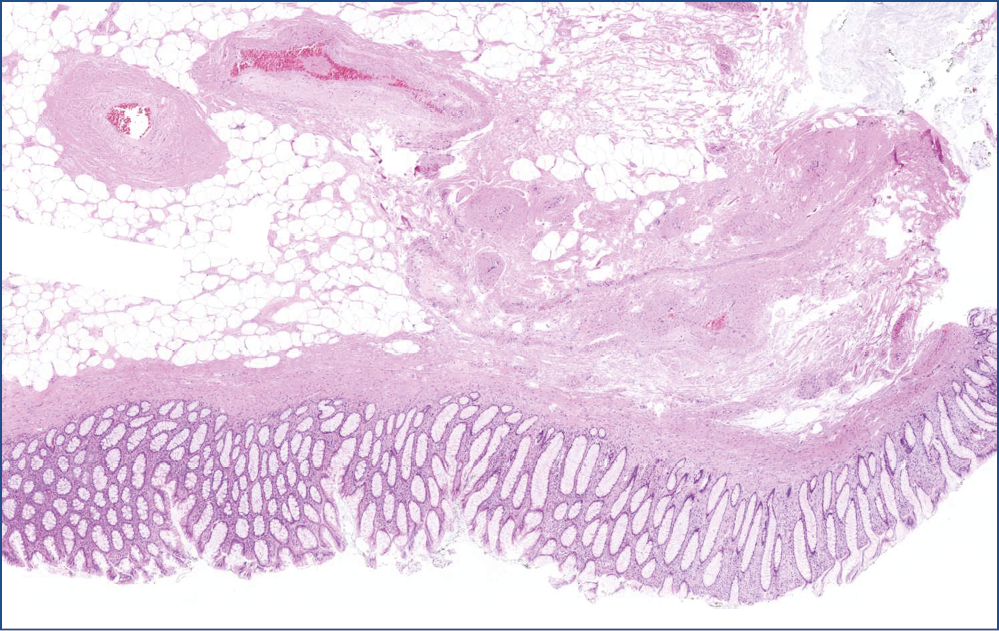 A 37 mm tumor was prepared for the pathological inves­tigation. The surface was smooth with areas of some irregularity and red discoloration. The 20×10×8 mm stalk was also separately examined. Both stamples appeared to be composed of mature fatty tissue, under the naked eyes.

Microscopic evaluation revealed that, the polyp consisted of mature fatty tissue (Figure 4), which was divided by fibrous septa and characteristically thick-walled, dilated vessels (Figure 5). The border of normal submucosa was not iden­tifiable. On the surface, the mucosa was of colonic type, but there was a visible nodule in which several secondary changes were recognized. That is, dissemina­tions by erosion and a mixed type inflammatory reaction were present in the lamina propria and also partly infil­trated into the crypts (Figure 6). Along with this inflammatory reaction and erosion, the crypts showed a relatively minimal decrease in mucin production. Moreover, other elements of atypical inflammation/regeneration have also been observed: (1) nuclear crowding and nuclear activa­tion, and (2) an increased amount of leukocytes among the epithelial cells (this could also be seen in the lamina propria) (Figure 7). A substantial count of Paneth cells was noted elongated structures found in other areas of the crypts (Figure 8), whilste others showed some serration towards their surface, resembling a picture of a hyperplastic polyp (Figure 5).

In conclusion, the histopathological diagnosis was that of a pedunculated submucosal lipoma. The size and the pedunculation caused a chronic movement (the polyp was found to be translocated into the terminal ileum) and irritation to the mucosa of the polyp, resulting in secon­dary changes: erosion, inflammations and a reactive hyperplastic reaction on its mucosal surface.

Lipomas are typically growing out from the submucosa as sessile polypoid mass, but some can be pedunculated. About 75% of lipomas are asymptomatic and found incidentally at surgery, autopsy or colonoscopy, especially fewer than 2 cm of diameter (2, 4, 8–10). 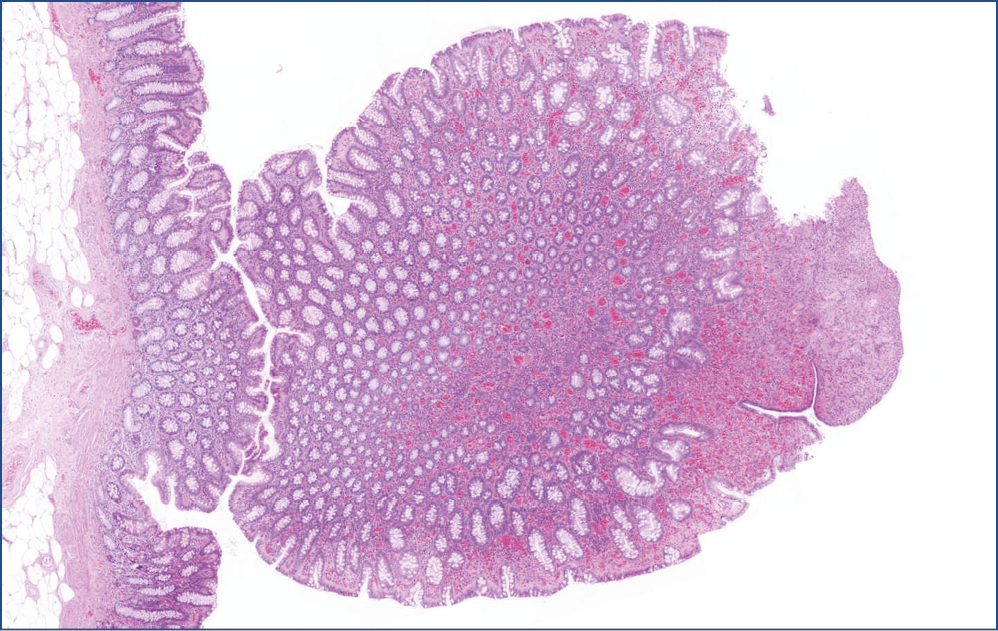 Figure 7: Lipoma erosion, close up of the nodule. Erosion is observed on the right sided areas that were replaced by granulation tissue, whereas on the left side, the mucosa became quite loose, because of the heavy mixed inflammatory cell infiltration. At the same time, crypts showed a minimal decrease in mucin production and variation in shape and size, indicating atypical inflammation/regeneration 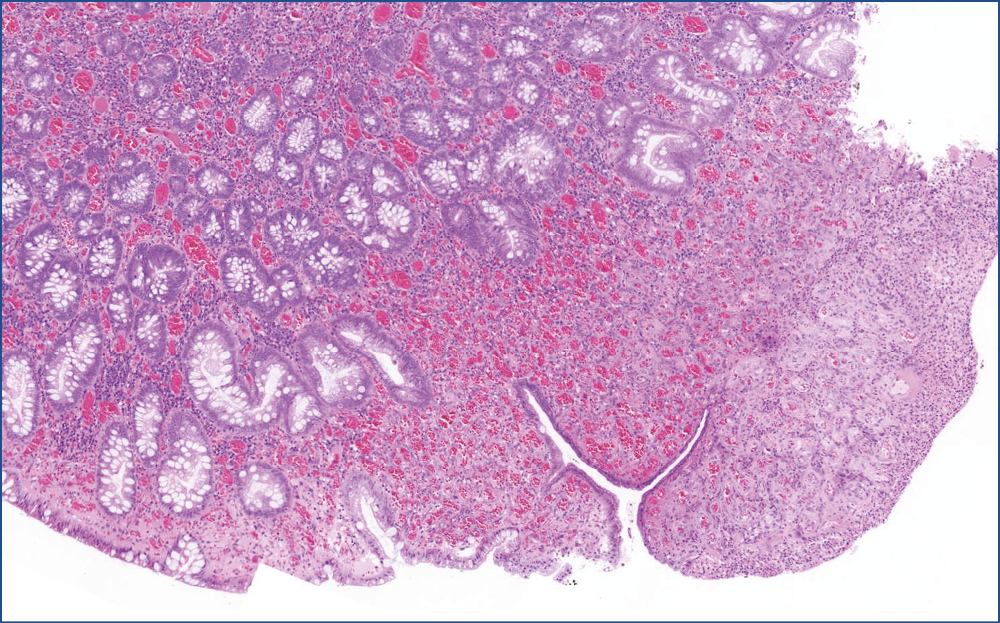 Figure 8: Hyperplastic crypts. The crypts became elongated with numerous Paneth-cells at the bottom. Towards the surface, crypts are a bit dilated and became uneven 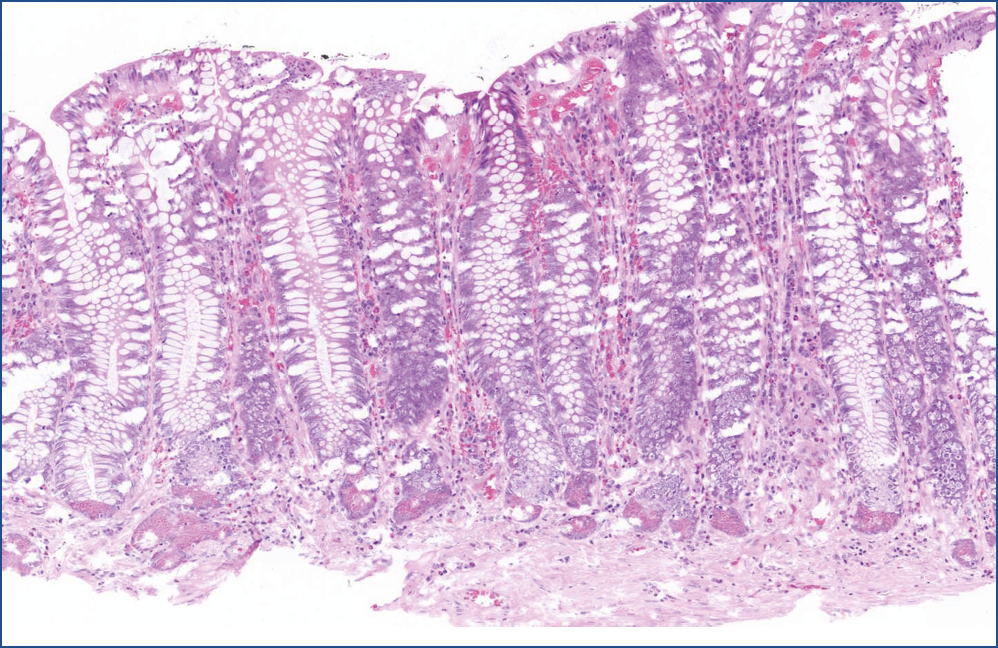 Clinical manifestations are associated with the size of tumor, and usually only bigger lipomas would cause clinical symptoms. These can be abdominal pain, bleeding or melena, intermittent diarrhoea or alteration of bowel habits, obstruction of the passage or even intussusception and thus ileus (7). A recent review has found that lipoma is the most common benign tumor causing colonic intussusception in adults (11). Larger lipomas can be also self-amputated and appear as a lump of haemorrhagic tissue in the stool (8).

As lipomas occur quite rare, they are usually undermined and misdiagnosed for more serious pathological differential diagnoses. This causes potential problems since the exclusion of malignant lesions are the most relevant. Imaging techniques usually show a round and smooth contoured filling defect, a non-specific finding occurring in any kind of tumors. Lipomas have a so called characteristic sign with barium enema, the ’squeeze-sign’, depicting that the tumor can be deformed by pressure or peristalsis (6). CT is a very helpful tool because fatty tissue has a characteristic densitometric value (5, 11). Sometimes ultrasound can also correctly diagnose lipoma (12). Larger lipomas develop numerous fibrous intervals in their otherwise mature fatty tissue, giving a lobulated appearance (13). The bigger the lipoma is, the more secondary changes can occur such as fat-necrosis, inflammation, ulceration and granulation tissue formation. Thus, the normal histological and imaging picture is subjected to change, causing even more severe differential diagnostic problems possibly towards any malignancy (14, 15).

Colonoscopy is a very sensitive and widely used method for diagnosing lipomas and the colonoscopic picture of lipomas has several specific characteristic features like “ pillow or cushion sign”, the “naked fat sign”, and the “tenting effect” (4, 16–18). On the other hand, the Bauhin’s valve might appear to be bigger, because of fatty tissue content, which can be misdiagnosed for a lipoma. As fat is a normal component of the submucosa, benign findings are sometimes not enough to exclude any malignancy. Furthermore, as larger lipomas can develop secondary changes resulting in atypical structures (fibrosis, ulceration etc.), biopsy can be misleading. In summary, colonoscopic biopsy evaluation is not recommended, because of possible non-specific findings, due to low tissue yield and higher risk of bleeding or perforation (6). Thus, exact diagnosis relies on pathological examination of the entire resected polyp.

In case of smaller and asymptomatic lipomas, the clinical management ’watch and wait’ could be enough. Treatment options for lipomas with clinical symptoms are various. The smaller and pedunculated ones can be easily removed via colonoscopy, but the sessile or larger than 2 cm ones are subjected to an elevated risk of complica­tions (e.g. more bleeding due to less effective cauteriza­tion and/or conductance in the fatty tissue) and, therefore, surgical resection is suggested (13, 19–21). Recently laparoscopic resection became more successful, but this needs a very strict and precise preoperative diagnosis (22, 23).

Histopathological diagnosis of lipomas can be done usually without any problem if the tumor is resected entirely, since the characteristic mature adipose tissue, thick-walled vessels are easy to recognize. The problem arises when the tumor is not entirely resected or sampling is superficial, and escalates when bigger tumors possess secondary changes in their adipose part (necrosis, bleeding espe­cially when resection is incomplete, etc.) or on the surface due to the chronic irritation and movement of the polypoid mass.

Our case illustrated several interesting features. Firstly, during endoscopic investigation, only the long stalk became visible at first glance; and, the head had to be pulled back from the terminal ileum for better visualization. This suggested a probability or a potential risk of intussusception or occlusion of the bowel, justifying the need for resection. Usually, lipomas bigger than 2 cm are rather surgically removed, but the long stalk in our case made endoscopic removal with an endo-loop possible. On the other hand, the long stalk made the pedunculated lipoma mobile and prone to chronic irritation. The structure and endoscopic appearance were suggestive of lipoma, excluding the ambiguous irregular and reddish surface. This latter was proven to be a regenerative and hyperplastic change by microscopic examination.

Hyperplastic polyps are usually developed as reactive processes in the colon. For example, it might be a reac­tive change of the mucosa with a long history of chronic irritation and inflammation. As bigger lipomas are prone to harbour secondary changes on their surface (like erosion, ulceration and inflammation) due to the chronic irritation, it is understandable, that our lipoma bore hyperplastic features in the overlying mucosa, although this is very rarely reported in the literature (15). We hypothesized that this kind of hyperplastic change might be more commonly found than reported. None­theless, on the surface of larger lipomas, the chronic irritation rather causes ulcerations or even necrosis and auto-amputation (which could have presumably occurred with this lipoma later), and, at that point, the hyperplastic nature of the surface might not be further recognized. According to our hypothesis, this medium sized lipoma (4 cm) was big enough to develop a hyperplastic surface, but was not big enough to be totally ulcerated so this intermediate phenomenon with both hyperplastic and erosive signs on its surface could be harvested.

In summary, the most important challenge of colonic lipoma characterization is their differential diagnostic misleading caused by the polypoid appearance mimicking other malignancies or epitheloid tumors with a malignant potential. Our case also demonstrates that superficial sampling could have led to the possible misdiagnosis of a hyperplastic polyp or any kind of (ulcerative) colitis, therefore further highlights the need for complete resection and histological examination.